The cover image is a partial screenshot of my site's thank you page, but the illustration comes from the wonderful work of Katerina Limpitsouni's undraw.co

I was updating my personal site the other day and thought, why don’t I write about some of the tech I’ve been using, some tools I use in my day-to-day as well as other resources that I use, even if they aren't everyday "go-to"s in regards to frontend. I've also popped in some resources that I think will just be helpful.

My personal site, iamdeveloper.com, is currently built with Gatsby. I chose it mainly as another outlet to mess around with React back in the fall of 2017. It's matured quite a bit since then with quite an ecosystem of plugins as well as theming now.

I understand GraphQL from a high-level, but I am still nowhere near mastering it, mainly because I have not had/made time to learn it yet. I have still managed to add some additional fields and alter queries, mainly thanks to the built-in GraphQL query/viewer tool that ships with Gatsby.

For those saying Gatsby is overkill for a static site, maybe, maybe not. I've been happy so far with it. I leave it up to you to see what works best for you.

I use Netlify on the free tier to host my site. They offer a great service and it integrates well with GitHub and continuous integration. I am not cheap, it is just that at the moment, I do not need more than the free tier. I actually went over my build minutes last month and paid a small fee, so now that they have my credit card... 😆

I wrote about automating my deployments to Netlify here. 👇

Note: Zeit is amazing as well. I just happen to be using Netlify.

I went with Netlify CMS mainly because I was sick of updating markup on my local and doing a git push. Also, at the time, from what I recall, there were not many options, if any. Since then, there has been an explosion of headless CMSes. Maybe at some point I'll take another CMS for a spin.

This site is amazing if you're looking for some quality illustrations in SVG or PNG format. Katerina Limpitsouni, who created undraw.co has done some fantastic work. She's not on DEV, but give her a follow and undraw on Twitter.

I am not an accessibility expert (so many things in the frontend! 😆), so tools like the ones below are super helpful. Someone who knows quite a bit about this topic though, is Lindsay Kopacz (@lkopacz). Definitely a great follow.

This is a great accessibility visualization toolkit that was started by Jordan Scales while he was working at Khan Academy.

Fun fact, I converted it to a Chrome/Firefox extension for those interested.

Deque's axe extension is another great one. It is available for Chrome and Firefox.

@wesbos has great courses. He teaches things so well and in a fun way. cssgrid.io is a great course for learning CSS grid that Mozilla sponsored, which is how Wes was able to make this course free. I highly recommend it. Note to self to go through this course again.

Wes at it again with another great free course. Check out JavaScript 30 to up your JavaScript game with fun little projects.

I purchased Every Layout while on sale last year, but the site content is all free. Andy Bell (@hankchizljaw) and Heydon Pickering do an amazing job.

There are tonnes of sites out there, so I'm just going to drop a few since this post is already an 11 minute read LOL.

I do not know the list of all CSS triggers by heart, so CSS Triggers is a great resource.

One that I revisit every now and then is JS Katas, previously called ES6 Katas. This is a great way to keep your JS skills fresh.

This is a great genre of learning. There are paid resources, but a couple of notable free ones are:

This one, I will admit, is probably overkill for my personal site which is currently pretty much just a blog, but at my current job, we're not using TypeScript, so I decided to keep my TypeScript skills fresh by using it.

Having said that, I've worked on several large projects using TypeScript and can 100% say, it allows for quicker refactorings, discoverability and avoiding silly errors. I have a mini-series on TypeScript for those interested.

If you've been on the fence about TypeScript, consider giving it a try in 2020. There is a huge ecosystem of types now and a lot of the popular frameworks either provide out of the box support or pretty easy setups to get going with TypoScript:

There is also TSDX, which is some fantastic work by Jared Palmer (@jaredpalmer). It's a great bootstrapping tool for TypeScript for different types of projects and it's officially endorsed by the TypeScript team.

And you know what? If you're still not a fan of types, that's OK. 😺

This is definitely a great watch for those looking to understand JavaScript's event loop.

Jake also has a great blog post about Tasks, microtasks, queues and schedules.

Storybook is such a great tool for building components and design systems. It started off as a tool just for React and since then has expanded to all the major frameworks as well as plain old HTML. Check out learnstorybook.com.

I will be the first to admit that I have not done a lot of work with animations, so I tend to Google stuff a lot when it comes to this space. Two gentleman that are experts in animation though have a great podcast and YouTube channel where they rebuild animations. The Keyframers is an awesome collaboration by @davidkpiano and @shshaw.

I still have many episodes to watch and to learn from.

A newer frontend tool out there that looks really interesting is VisBug. I tried it out briefly, but I must admit, I have not dug into this too deep yet.

This is the handy work of Adam Argyle.

Update January 8th 2020: Adam Tweeted back to me that you can launch tota11y from VisBug. Cool stuff. Thanks Adam!

Note: This browser extension is currently only available for Chrome.

This might sound like an obvious tool, but I have worked with people who do not use them that much.

Someone that knows these tools well and that I highly suggest you follow is Umar Hansa (@umaar). He is on DEV and has no activity, but links in his bio can lead you to other places to find him on the web. He has a great newsletter for dev tips, that I highly recommend subscribing to.

What's going on with your web requests? Looks like there is a traffic jam. These tools have your back:

Josh Comeau is a talented frontend who currently works for Gatsby. He Tweeted during the holidays some other great open-source/free resources that I suggest you check out. Here's the Tweet thread. He's also a great follow.

Emily Freeman (@editingemily) started this in I believe 2017. Lots of great articles on JavaScript. It's a new January, so check out javascriptjanuary.com.

DEV has so many great posts from people from all over the globe in regards to frontend. I'll share some that I love, but definitely navigate around. So many great ones.

This falls under the obvious category probably, but it's worth mentioning it since it is open-source.

This has been my go-to editor for work-related stuff since believe it or not 2015. Back in 2015, I was working on a product for an e-commerce company and TypeScript was to be used in the frontend. At the time, VS Code was the only editor to have TypeScript support. Back in 2015, there were no extensions for VS Code. It was only about a year and a half later that extension support was added. Since then, the extension ecosystem has exploded.

A great addition to the ecosystem has been the Live Share extension pack. This is such a great way to do pair programming. 🍐

If you're interested, it is a little outdated, but here is my VS Code setup. These days, I roll with Sarah Edo's Night Owl theme and the wonderful font, Dank Mono (yes I paid for it, but it's nowhere near the price of Operator Mono).

I created the @vscodetips Twitter account back in September 2017. People seem to enjoy the tips I post or things I retweet related to VS Code. If VS Code is your jam, consider giving it a follow.

VS Code tips is also on DEV, but I have not done much there yet. You can check out the profile here

Refined GitHub is not frontend specific, but a lot of us use GitHub for work. It's a great extension available for Chrome or FireFox. The Chrome extension also works for some Chromium-based browsers. The ones I can confirm it does work on are Brave and the new Microsoft Edge.

There are too many features to mention, but my favourites are automatically deleting a branch after it is merged, and prompting you to create a PR if you're on GitHub and just pushed a branch or made changes to a branch that currently does not have a PR open.

More and more development is being done directly on the web, whether it be proof of concepts or full-blown apps. So much has happened in this space in the past few years. 👏

I do not have any affiliate links in any of the stuff posted below. They are just great resources that help me. Let's get started.

I purchased the Refactoring UI book last year and loved it. I've given it a full read and will probably give it another read. The price varies depending on the type of package you go with. I got a great pre-release sale deal, so I grabbed the whole enchilada.

Also, Steve Schoger (@steveschoger on Twitter), one of the authors of the book, Tweets a lot too about Refactoring UI. A great follow.

As mentioned above, I purchased Every Layout. This is a great buy and the additional resources are great. I've been reading the ebook (not finished yet) and have really been enjoying it. Great work Andy and Heydon!

There are browser extensions that do part of what xScope does, but a few years ago, a co-worker introduced me to xScope. The only downside to this tool is that it is only available for Mac. If you are on a Mac though, I highly recommend it. 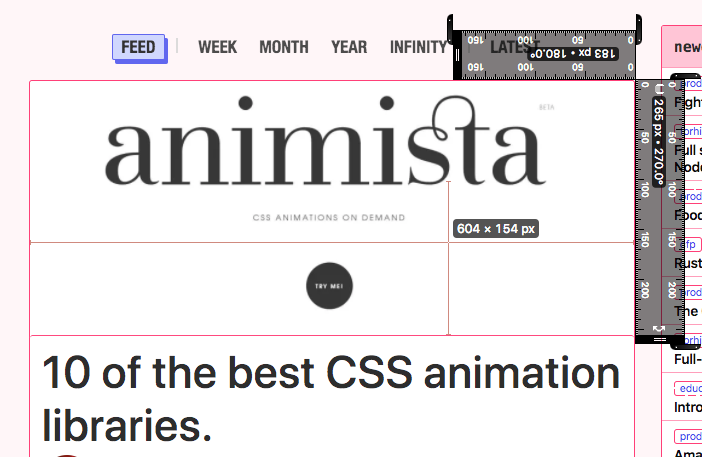 Sizzy is a new one in my toolbelt, but so far I am loving it. I snagged it at a great price during Boxing Day week. In a nutshell, it allows you to work on a site or application and see how it appears in different devices. It has more to it than that, but I am still new to it, so I probably haven't unleashed all its awesomeness yet. Kudos to @thekitze for building this awesomeness. 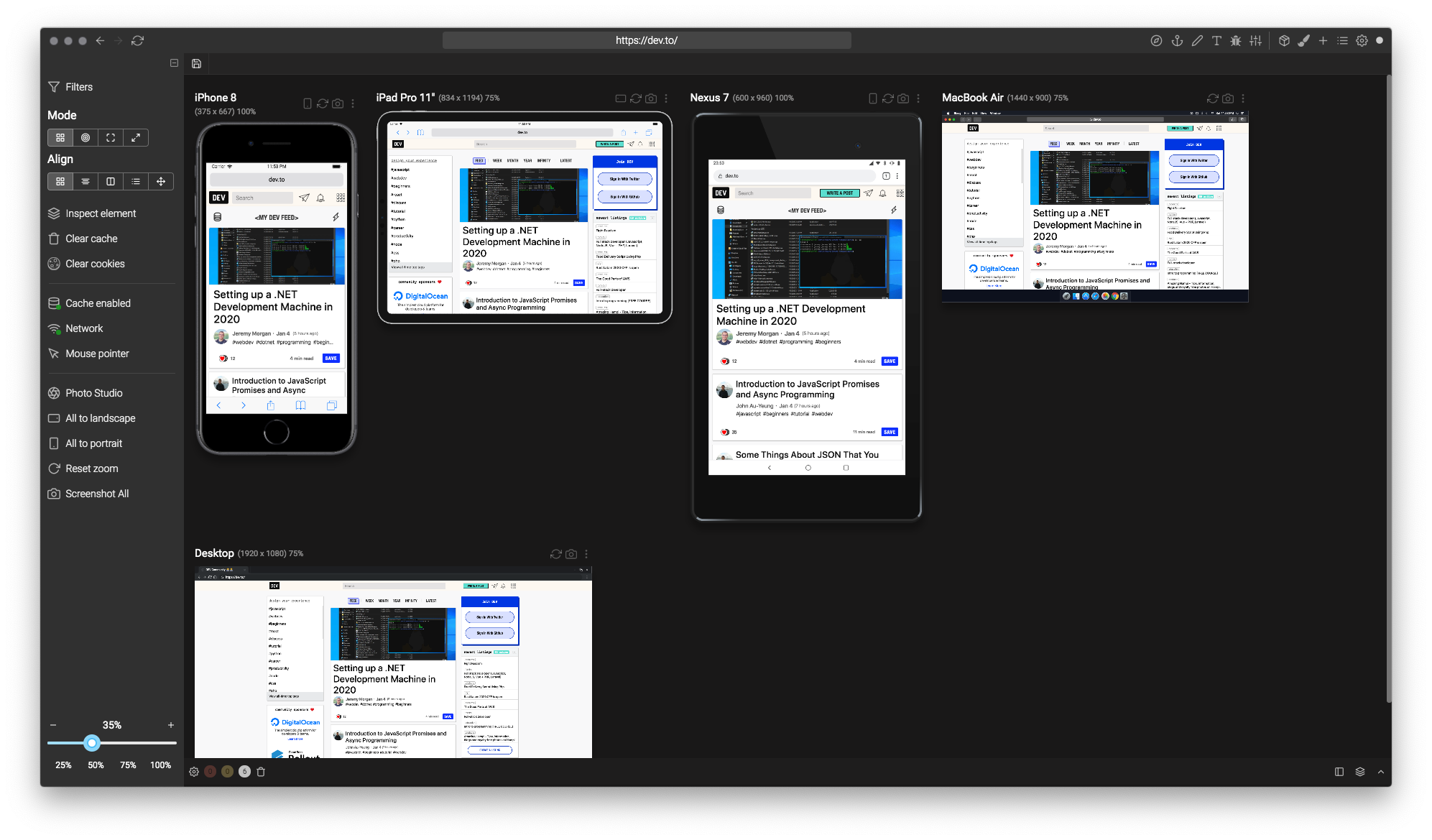 These will most likely not come as a surprise, but it's worth mentioning them.

Also, there is a new kid on the block, Educative. Looks like they are gaining some traction, so probably worth checking out as well. They're also on DEV, posting great content.

That's All She Wrote

There are so many resources out there but this is what my current brain dump brought to the table and at some point we all have to go to the bathroom. 😆 I probably could have organized this better, but for now, this is how the dump came out.

If you have resources not listed that you think other frontend developers would benefit from, drop them in the comments! I hope you enjoyed the read and you can go to the bathroom as well now.

Until next time peeps!